CONQUERING FEAR BY USING HER VOICE

If you were to ask people across the globe about their top fears, statistics show that 50-percent would respond “Public Speaking.” Pascaline would have answered the same.

Pascaline is one of our Computer Science scholars in Rwanda. While she was ready to tackle the world of technology, stepping out from behind a screen and onto a stage was something she never thought she’d do.

When she was selected by her school to participate in an Entrepreneurship & Leadership Summit organized by Babson College, she doubted that she was truly qualified.

“I was not very confident about my speaking and listening skills,” Pascaline admitted. “I was also from a French background and feared expressing my ideas in English to a group of Americans.”

Despite her fears, she decided to attend the summit.

On the final day of the event, her group chose her to present their business pitch in front of a panel of investors, along with an audience of all the summit attendees. Her heart was racing, but she accepted their nomination. She didn’t want let her team down.

To her surprise, she won her group third place! 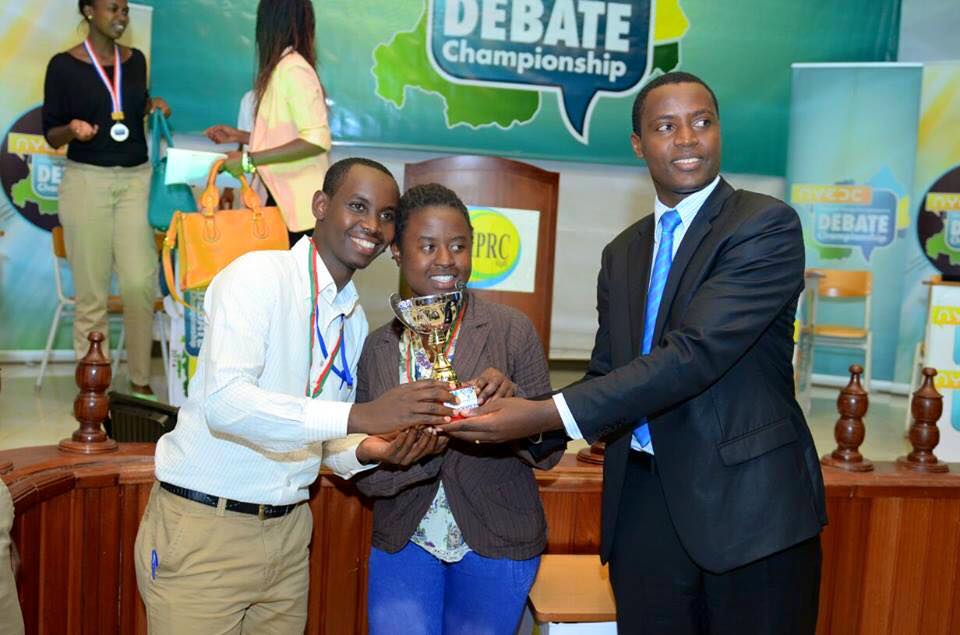 The next year Pascaline was invited to the Rwandan National Youth Entrepreneurship Debate. Even though she was successful in the business pitch competition the previous year, when she stood before the judges, she said she felt like she was about to cry.

“Luckily, my colleagues built me up in confidence and we won that round,” Pascaline recalled. “We even got a chance to attend a debate camp where we met very good coaches and mentors.”

As Pascaline became further involved in public speaking, she saw how it was helping her to develop valuable leadership skills: critical analysis, quick thinking, managing emotions, and forming and accepting constructive criticism.

Pascaline was invited to work with the IMBUTO Foundation and PAJER (Parlement des Jeunes Rwandais) in Rwanda, organizations that provide speech and leadership trainings to children who aren’t in school.

“I was so glad to work with these organizations,” Pascaline said. “It amazed me because I knew how much it hurt to have words in your heart you cannot utter. These non-schooling youth have different challenges. Teaching them debate, leadership, and public speaking is a great way to help them work for their future career and complement their knowledge with different skills.”

As she watched the children grow in their confidence, Pascaline felt proud of their success.

“In my life, I have a strong wish of helping people to know and understand their voice,” Pascaline said. “I plan to continue volunteering in secondary schools, and one day I hope to become a University lecturer.”

In 2015, Pascaline served as a judge in the National Universities Female Speech Championship, and represented Rwanda in the Pan-African Universities Debate Competition in Ghana, where her team finished 36th out of 92 groups from 13 countries.

Worldwide, culture has not always supported women in leadership positions, or standing up to use their voice. Pascaline, however, wants that to change.

“As a girl, participating in debate helps you to be useful for your society. You do not fear to give your opinions in a meeting, and you discuss together with men solutions to your community, nation and the world as a whole. Simply put, it’s a powerful tool to help people think and speak about a better world.”